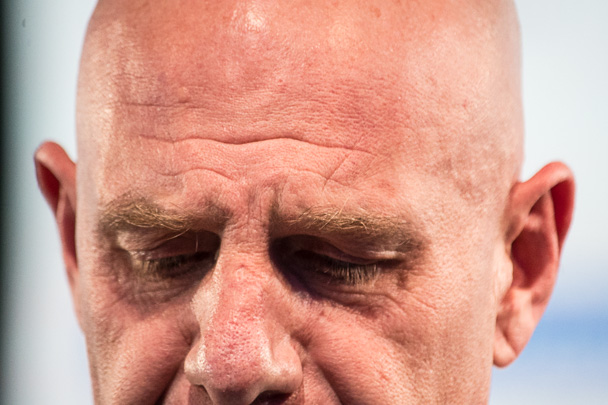 Gutwein promised the Tasmanian Liberals would disclose all donations over $5000. They didn’t. 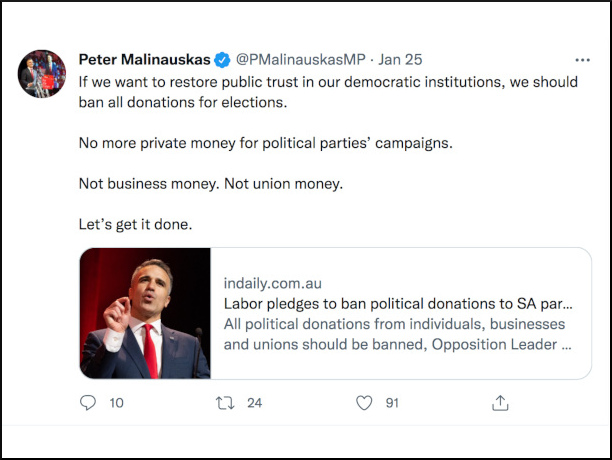 Early in the SA election campaign, Labor’s leader, Peter Malinauskas, announced he wanted “this state election to be the last state election where private money plays any role”.

“If we can do one thing to improve public confidence in our democratic institutions, it’s this: ban all donations for elections. No more private money for political parties’ campaigns - not business money, not union money,” he said on Twitter.

Malinauskas said he would request advice from the state Attorney-General’s Department and the solicitor-general on how he could proceed with the policy.

Asked by Tasmanian Inquirer why the government had settled on $5000, the figure at the highest end of the range of possible disclosure thresholds he had flagged in February 2021, Gutwein said he had followed a lead set by South Australia.

“I looked around at what was occurring around the country. The South Australians have a donations disclosure level of above $5000. $5000 seemed about right,” he said.

In reality, the Tasmanian government’s proposal only partly mirrors the existing SA legislation. It is worth quickly recapping how it measures up - and whether the existing SA model has been effective.

The SA disclosure threshold was set at $5000, but it was benchmarked to increase with inflation. It has now increased to $5576. It applies to the cumulative value of donations from a donor within the financial year.

In the 2020-2021 financial year, the Liberal Party of South Australia received $4.1 million in income. But data submitted by the party to the state’s electoral commission revealed only 14 donors made donations above the threshold (which was then $5510). Together, they contributed just $219,344. The source of a further $949,149 income was revealed on the party’s federal return.

Between the two returns, the origin of almost $1.17 million was revealed, representing only 28.5 per cent of the party’s total revenue.

If the same level of disclosure applied to the $3.4 million in income received by the Tasmanian Liberal Party that year, the origin of just under $975,000 would be known.

There are other aspects of South Australia’s law that the Gutwein government proposes emulating, most notably how frequently donations have to be disclosed. South Australia currently requires six-monthly returns to be submitted, reduced to weekly in an election period.

Gutwein’s proposed legislation would just move Tasmania from having no disclosure requirement to having the worst legislation of any Australian state.

Requiring returns to be submitted every six months means less administrative work for the parties and candidates, but is far less timely and valuable disclosure for voters than best practice. Queensland, for example, has real-time disclosure. Why shouldn’t Tasmania?

But there are two core elements of South Australia’s electoral law that the Gutwein government does not embrace.

South Australia caps campaign expenditure by a registered political party at $75,000 per House of Assembly electorate multiplied by the number of electorates contested. The Gutwein government proposes no campaign spending limits at all in the House of Assembly.

And South Australia’s law bans charging an entry fee of more than $500 for events where attendees are promised “access” to ministers, MPs or ministerial staff. Electoral reform advocates want “cash-for-access” forums banned altogether. The exposure draft of Tasmania’s bill does not include an equivalent provision to South Australia's or a ban on these schemes.

There is an obvious reason for that. The Tasmanian Liberal and Labor parties operate lucrative corporate  "cash-for-access" schemes that are kept well out of public view. For example,  a $550-a-head event in early December 2021 with Labor leader Rebecca White and the shadow minister for finance, Dean Winter, was promoted as an “exclusive end of year dinner”  that would provide donors with an opportunity “to hear about and have input into Labor’s policy focus and direction”.

It would just move Tasmania from having no disclosure requirement to having the worst legislation of any Australian state.

Malinauskas’s proposal to ban all political donations would remove the figleaf Gutwein planned to hide behind, and further expose how limited the Tasmanian plan really is.