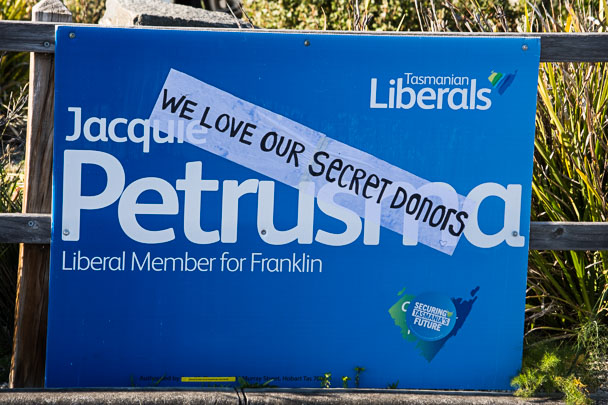 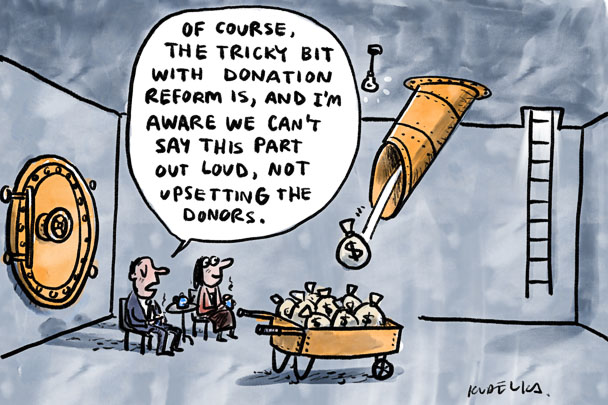 What is the current situation with political donations in Tasmania?

Tasmania is the only state in Australia with no state-based political donation disclosure law.

Tasmanian political parties or candidates registered with the Australian Electoral Commission to contest seats in federal elections must disclose individual donations of over $14,500 (indexed).

In the last financial year, the Tasmanian branches of the Liberal, Labor and Greens received almost $5.5 million in income and disclosed the origin of just over 23 per cent. (The Greens voluntarily disclose all donations over $1500). The source of almost $4.2 million in income is unknown.

There is no disclosure requirement for parties or independents that only run in state elections.

What about local government?

Regulation of local government campaign donations is not included in the government’s bill and will be dealt with separately under changes to the Local Government Act.

Currently, sitting local government councillors must disclose donations of more than $50 to the general manager of their council with the register of gifts published on the relevant council’s website. The state government agreed in April 2020 to extend the disclosure obligations to cover all candidates at a local government election.

The proposed reform has stalled, and it is unclear whether it will be in force before the next local government elections scheduled for October 2022.

Why has it taken so long to get political donations disclosure?

There has been growing concern in Tasmania over the secret funding of political parties and campaigns by third-party groups.

The “Tasmanians for a Better Future” campaign against the Tasmanian Greens in the 2006 election campaign brought the issue to the fore. The campaign, run by the PR firm Corporate Communications, was estimated to cost between $100,000 and $300,000. The donors remained secret.

The impetus for reform was rekindled after the 2018 election when the Liberal party, which had watered down its gambling policy, won with the benefit of $514,000 in donations from gambling companies. The donations were not revealed until February 2019, when returns to the Australian Electoral Commission were published. The gambling industry also ran a multi-million dollar third-party campaign against Labor and the Greens, which had proposed removing poker machines from pubs and clubs and confining them to the state’s two casinos.

Then premier Will Hodgman sought to quell public disquiet over the pro-pokies campaign by promising political donations reforms. After a series of delays, the draft Electoral Disclosure and Funding Bill was released for public comment in late 2021.

Tasmania currently has uncapped campaign spending, limited disclosure of donations to political parties, and no regulation of third-party campaigns.

When will the government’s bill be debated?

The bill is likely to be debated in parliament later this year.

Why does donations reform matter?

Tasmania currently has uncapped campaign spending, limited disclosure of donations to political parties, and no regulation of third-party campaigns. Reform advocates have expressed concern that cashed-up groups can swing elections to entrench policies that favour their interests.

For example, the gambling industry may have spent $5 million or more on advertising and political donations ahead of the 2018 state election. Losses on poker machines in Tasmania in the four years since the election has reached over $673 million. With more than 60 per cent of pokies turnover occurring in pubs and clubs, a multi-million advertising campaign and the subsequent passage of favourable legislation could have created a multi-billion dollar windfall over the next few decades for the gambling industry.

The Electoral Disclosure and Funding Bill would introduce state donations disclosure and public funding. It would also regulate third parties involved in election campaigns, such as unions, community and industry groups.

The government lists one of the objects of its bill as helping “prevent undue influence, by significant political donors and foreign donors, in the government of the state and to help prevent corruption”.

Are there good features in this proposal?

The best features of the government’s bill are that it:

The absence of a cap on campaign spending means public funding will provide a floor to political party campaigns rather than a substitute for private and corporate donations.

Are there problems with the proposal?

The government does not propose campaign spending caps. When unveiling the draft proposals back in February 2020, Attorney-General Elise Archer said there was “insufficient evidence to determine whether caps are genuinely needed” and they could be “dealt with at a later stage”.

The Labor party and the Greens support electoral spending caps.

Victoria has set a cap of $4210 from a single source within four years between elections. NSW has a donation limit in 2021-22 of $6700 to a party and $3100 to an unregistered party, candidate or third party.

From July 1, 2022, Queensland will cap donations to registered political parties, their associated entities, and candidates at $10,000 over a four-year parliamentary term. Donors will only be able to contribute up to $6,000 in total to candidates of the same party and $4,000 to an individual political party or associated entity. The cap does not apply to third parties.

The absence of a cap on campaign spending means public funding will provide a floor to political party campaigns rather than a substitute for private and corporate donations. This may have the effect of giving an advantage to existing political parties at the expense of independents, women and new parties with fewer resources.

In early 2021, then premier Peter Gutwein said the government would support a disclosure threshold of between $1000 and $5000, subject to modelling.

Ahead of the 2021 state election, Gutwein said the Liberal Party would voluntarily disclose all donations over $5000. (It didn’t). After winning the election, the government included the $5000 threshold in the draft bill, saying it was based on the South Australian legislation, the weakest of any state scheme. No modelling has been released.

The South Australian model has not led to a high disclosure rate. Its indexed threshold was $5510 for the 2020-2021 financial year. It led to the SA, Liberal party disclosing the origin of just 28.5 per cent of its total revenue. If the same level of disclosure applied to the $3.4 million in income received by the Tasmanian Liberal Party that year the origin of just under $975,000 would be public.

A high threshold could mean four donors could split the $18,500 cost of a Legislative Council candidate’s campaign, and no disclosure would be required.

During an election campaign, donations would be disclosed to the TEC within seven days of receipt. This is in line with Queensland, ACT and South Australia, the states with the tightest regulation of contributions. Queensland also requires donations to be disclosed within one day in the last week of an election.

The TEC would be required to publish details of donations within seven days of receiving a declaration. If a party or candidate took seven days to declare the donation and the TEC then take seven days to make it public, donations made within the last two weeks of an election campaign may not be public until after polling day.

It could encourage donors to wait until just before the election to donate, knowing there would be no disclosure before the poll.  Already, some donations do come late. For example, two days before the 2018 election, the Tasmanian Hospitality Association, a lobby group for pubs and clubs, made seven donations to the Liberal party totalling $57,000.

Election Funding Reform Tasmania, a group arguing for greater disclosure, has argued for a ban on donations in the last week of an election campaign.

Outside an election period, the government is proposing donations be disclosed every six months. Parties and MPs would have 21 days after the end of each six-month period to disclose.

Civil society groups have called for a ban on political parties hosting secretive “cash-for-access” forums that allow lobbyists and corporate donors to meet with ministers and shadow ministers.


This is not best practice. Federal donations returns submitted to the Australian Electoral Commission are available online permanently with no sunset provision.

Since August 2013, the Tasmanian Liberals have had a voluntary ban on accepting donations from tobacco companies. This ban followed a direction from then Opposition leader Tony Abbott. The Legislative Council rejected a Tasmanian Labor and Greens amendment to the Electoral Act in November 2012 to ban tobacco donations.

NSW, Queensland and the ACT have banned donations from property developers and their close associates. NSW has also banned contributions from gambling, tobacco and for-profit alcohol companies.

In NSW, industry associations with prohibited donors making up a majority of their members are also blocked from making donations. Queensland has a similar provision for organisations representing property developers.

Both the Tasmanian Liberal and Labor parties host these forums. A $550-per-head Labor forum just before Christmas 2021 said donors would have an opportunity “to hear about and have input into Labor’s policy focus and direction”.

These events are not covered by the proposed legislation.

A submission by the Human Rights Law Centre, the Australian Conservation Foundation and the Australia Institute warned that this would leave Tasmania with the weakest third-party provisions in the country. They proposed that donations above the threshold be disclosed regardless of when they are made. And they said it should apply to all donations, not just those intended explicitly for electoral spending.

If left unchanged, the government’s bill would leave the door open for a repeat of widely criticised campaigns such as the ‘Tasmanians for a better future’ campaign in 2006 and the pro-gambling campaign in 2018.

Does anyone oppose donations disclosure reforms?

The Liberal party argued lowering the disclosure threshold would impinge on citizens' ability to “express their political views without being subject to intimidation, campaigns against them or potentially violence”. This argument was echoed by Gutwein when he first outlined the framework for donations disclosure.

The Liberal party submission provided no evidence an individual donor to a Tasmanian party has ever been the target of harassment or violence. Companies and industry associations, which comprise the overwhelming bulk of disclosed donors, aren’t citizens and cannot vote.

The Liberal party proposed the donations disclosure threshold be increased to between $25,000 and $50,000. In the last five years, the Liberal party has received only 14 donations -  excluding a deceased estate - over $25,000.

How does the government's plan compare to other states?

New Premier Jeremy Rockliff has not commented on the proposed changes.

The effectiveness of the disclosure scheme will ultimately depend on the positions adopted by the independent and Labor members of the Legislative Council, and the strength of representations from the community that helps shape where they line up.

Where can I get more information?

The Australian Parliamentary Library recently published a detailed comparison between state and federal electoral finance schemes. The Centre for Public Integrity has published a series of research papers on the influence of money in politics.

Public submissions on the Interim report on Electoral Reform are here. The submission by the Greens on the draft bill is here, the Labor party’s is here and independent MP Meg Webb’s position is here.