'Fantastic offer for one client': questions raised about The Mercury’s advertorial series 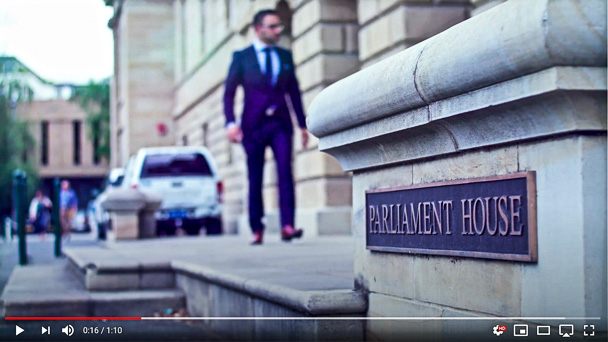 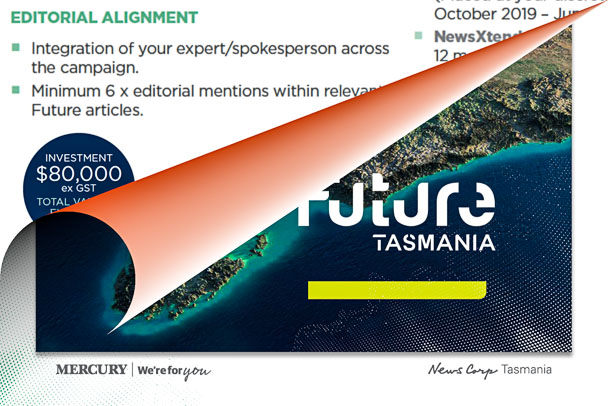 The University of Tasmania paid $80,000 to be the lead sponsor of a “Future Tasmania” series of advertorial articles in The Mercury and in return was guaranteed a minimum of six “editorial mentions”, a practice queried by a leading journalism academic.

Rodney Tiffen, emeritus professor in government and international relations at the University of Sydney and a leading media analyst, raised concerns about the ethics of the sponsorship deal.

“It seems to me to be skating on very thin ethical ice in giving guaranteed coverage for sponsorship,” he told Tasmanian Inquirer.

Documents obtained under Tasmania’s Right to Information Act show The Mercury proposed a 16-day series that would present “tangible and achievable objectives for a better Tasmania”. It would canvass areas including the “development versus conservation debate, how we can best share the wealth across our state, and how we can best fire up business and employment”.

The proposal was issued in September 2019 by Damon Wise, News Corp Australia’s Tasmanian general manager, and The Mercury’s then editor, Chris Jones. “I have a FANTASTIC offer for one client - can I see you SOON!! This arvo? I can come to you?”, a Mercury representative wrote to UTAS.

For $80,000, the university – described as a “presenting partner” – was promised “editorial alignment” with the “integration of your expert/spokesperson across the campaign” and a “minimum of 6 x editorial mentions within relevant Future articles”. Sponsors that joined the campaign would “influence debate and opinion on the future of our state” and be “positioned as experts in your field”.

There was a basket of other promotional sweeteners, including two double-page and eight full-page ads, two “native content” articles on The Mercury’s website and a year-long digital marketing campaign. UTAS was also offered “category exclusivity”, which would exclude any other university being a sponsor.

The Mercury estimated the $80,000 package was worth in excess of $200,000. UTAS signed up within a few hours of being pitched the proposal.

Tiffen said the agreement between the newspaper and university appeared to be “breaking the spirit” of Australian Press Council guidelines that News Corp Australia, as a member, had agreed to abide by.

The council requires members to “ensure that conflicts of interests are avoided or adequately disclosed, and that they do not influence published material”.

It developed non-binding advisory guidelines 15 years ago to address a growing interest by cash-strapped media companies in advertorials – sponsored content written in the style of news articles.

“It’s more about boosterism and barracking for pet causes than reporting,” said Tiffen.

In its June 2005 guideline the council said ‘advertorials’ should be identified as an “advertisement”, “advertising feature”, “special feature” or “sponsored feature” so readers were not led to believe the content was based on “editorial news values free of commercial influences”.

The “Future Tasmania” series did not explicitly state the articles were advertorials or sponsored content, though the logos of sponsors were prominently displayed in those sections of the newspaper. A sample of online articles from the series suggests this did not extend to digital versions.

Wise defended the use of logos as adequate disclosure. He said the sponsors “were identified at the top of the page and in pre-event advertising – this was not hidden from the public”.

Asked why it was considered appropriate to promise guaranteed coverage in news articles to a sponsor, Wise said The Mercury “retained full editorial control and independence over all published content at all times, choosing the stories and their subject matter”.

The Mercury, along with most newspapers in Australia, has been hit by declining advertising revenue and hard-copy sales. Growth in digital subscriptions and advertising has failed to offset other losses, leading to cuts in staffing and increases in cover price, but the cost-cutting has failed to stem the fall in revenue.

For the Mercury, occasional sponsored series serve the twin purposes of raising additional revenue and marketing itself.

Tiffen said: “This campaign is a bit of a throwback to the growth era of US newspapers seeking to establish themselves as the champion of their locality and embedded in their community. It’s more about boosterism and barracking for pet causes than reporting."

UTAS was not the only sponsor of the “Future Tasmania” series. The Mercury also pitched other potential sponsors with packages of benefits that cost $40,000, $20,000 and $10,000 respectively.

While UTAS was the lead underwriter of the campaign, other sponsors were real estate company Blue Edge, TasTAFE, Hobart Airport, the civil construction company Hazell Brothers, the peak industry lobby group the Tasmanian Chamber of Commerce and Industry, and the Tasmanian-headquartered superannuation fund TasPlan. The Mercury potentially raised more than $140,000 in total.

“The temptation to do this is getting greater, particularly in regional areas as traditional revenue streams decline,” Tiffen said.

The UTAS documents released under the Right to Information Act for the “Future Tasmania” series are available here.