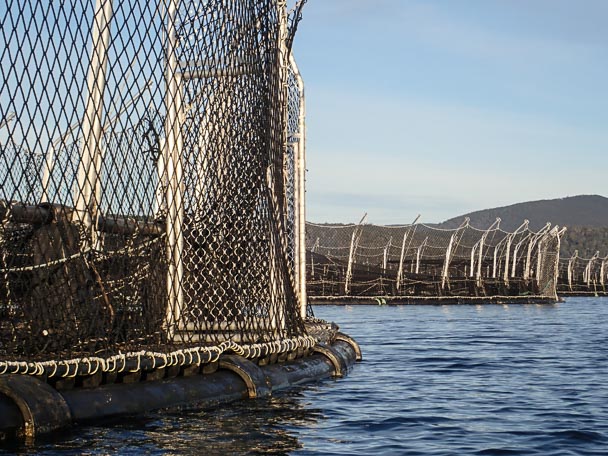 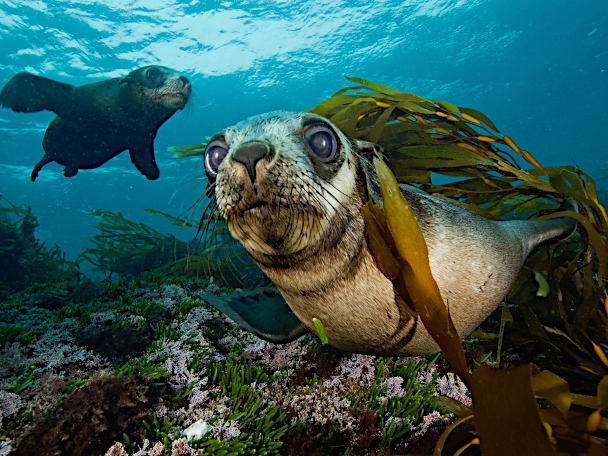 Seals are protected in Commonwealth waters and it is an offence to injure them without a permit. Image: Jon Bryan/www.seanature.com.au

Environment groups have called on the Morrison government to rule out allowing salmon farming companies to use explosives and guns loaded with “bean bag” rounds to scare seals at a proposed trial in Commonwealth waters off the north-west coast of Tasmania.

Under Tasmanian laws, the companies are allowed to use underwater explosives, known as “seal crackers”, to deter predators at farms in state waters. Other authorised measures include shooting seals with fabric coated plastic shells containing lead shot, known as bean bag rounds, and darts with blunt tips known as “scare caps”. Official documents show some seals have been killed.

Conservationists expressed alarm that the federal government may allow similar measures to be used during a three-year trial in Commonwealth waters to be overseen by the Blue Economy Cooperative Research Centre (CRC), a government-funded not-for-profit company that lists Tassal, Petuna and Huon Aquaculture as partners.

Seals in Commonwealth waters are protected under the federal Environment Protection and Biodiversity Conservation (EPBC) Act. It is an offence to kill, injure or move them without a permit.

“The minister for environment must ban all cruel seal deterrents and also prevent the toxic salmon offshore sea grab,” said Bec Howarth, a fish farm and marine campaigner with the Bob Brown Foundation.

Federal Environment Minister Sussan Ley did not respond to questions from Tasmanian Inquirer about whether she would allow the use of explosives and other deterrents against seals in the offshore trial, instead referring the inquiry to the Assistant Minister for Forestry and Fisheries, Tasmanian Senator Jonathan Duniam. Duniam said the offshore salmon farming operation was still being planned.

“Should that process identify a significant impact on a matter of national environmental significance under the [Environment Protection and Biodiversity Conservation] Act it would be referred through the appropriate channel,” he said.

Following the passage of amendments to the state’s fisheries legislation through the Tasmanian Parliament two weeks ago, the Gutwein government is seeking federal government approval to allow it to grant and manage permits in Commonwealth waters adjacent to Tasmania.

Under a September 2021 memorandum of understanding (MOU), the Tasmanian and federal governments agreed to amend state and commonwealth legislation to facilitate the development of an offshore industry.

Tasmania’s Minister for Primary Industries and Water, Guy Barnett, did not rule out the use of underwater explosives and other deterrents in the trial. “Animal welfare has always been and will remain very important. There is a seal management framework already in place, and animal welfare guidelines must be complied with,” he said.

Documents provided to Environment Tasmania last year under the Right to Information Act revealed that in the three years to the end of January 2021, the three salmon companies had used 75,339 underwater explosives in attempts to scare seals away from fish farm operations.

The documents also revealed severe injuries and deaths of seals at or near fish farms.

In one document, a Tasmanian Department of Natural Resources and Environment Tasmania (NRE Tas) wildlife biologist Sam Thalmann wrote that salmon company estimates of seal deaths due to the use of approved deterrents were “probably a large underestimate”.

In a separate document, NRE Tas estimated 70 seal deaths at salmon farms between January 2018 and May 2021. The cause of many seal deaths was unknown, but entanglement in netting was the most common identified factor. Deterrent devices were the primary cause of several seal deaths.

While the Tasmanian government has refused to ban the shooting of seals and the use of underwater explosives against them, some salmon companies have sought to reduce their reliance on some of the controversial practices.

Huon Aquaculture has not used “scare caps” or bean bag rounds since August 2018 but continues to use “seal crackers” .

Petuna says on its website that it uses deterrents against seals. It did not respond to a question about what specific measures it uses.

Jilly Middleton, a marine campaigner for Environment Tasmania, said she was “deeply concerned” that allowing the use of existing measures against seals offshore “would likely lead to an increase in animal welfare breaches.”

“The salmon industry needs independent observers and real-time, whole-farm footage going to a regulator who’ll actually regulate, whether it’s near-shore or not,” she said.

Right-to-Information advocate Rick Snell, an honorary associate professor in law at the University of Tasmania, said he was concerned the MOU between the governments did little to ensure public transparency. One clause says the state and federal governments will not make any public statement about “details of activities undertaken” unless both parties agreed in writing. An exception is if one of the parties is legally required to disclose information.

“Unfortunately, it does place a pro-secrecy frame or response attitude over the activities of the parties in this area,” Snell said.